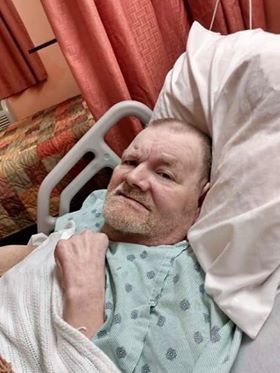 Ronald G. Adkins 66 of Peach Creek, WV was born July 5th, 1954 at Hamlin, WV a son of the late Esta Adkins. He went home to be with the Lord on Monday, August 17th, 2020 at Trinity Health Care at Logan, WV. He enjoyed talking on the Ham Radio and going fishing. Preceding him in death are 3 sisters: Gloria McDonald, Patricia Butcher, and Deborah Messer. Those left to cherish his memory are his Wife Linda(Prichard) Adkins, 3 sons: Ronald L. Adkins, Mark(Heather) Adkins, and Brian Adkins, 1 grandson: Aiden Adkins 2 granddaughters: Mileena Maynard and Isabella Miracle 4 sisters: Karen (Danny) Collins, Linda (George) Sprouse, Rebecca(James) Nelson and Kathy(Clarence) Crum and several nieces and nephews and a host of family and friends that he loved dearly. A memorial service will be held September 5, 2020 at 3:00 PM at the Tracy Vickers Community Center located at 68 Boise Street, Chapmanville, WV 25508 with Wesley Nelson conducting the services. The family would like to thank everyone for their prayers and hospitality that has been shown for him and the family. Also a thank you to the staff at Trinity Health Care of Logan. Going along with Ronaldâ€™s wishes his body has been cremated. Akers-James Funeral Home is serving the Adkins Family.
To order memorial trees or send flowers to the family in memory of Ronald Adkins, please visit our flower store.