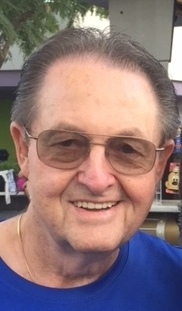 Bruce R. Lawson, 75 of Logan passed away Saturday, November 4, 2017 at the Dignity Hospice House of Chapmanville. He was born March 5, 1942 in MudFork a son of the late Bruce (Buster) & Cora Lemon Lawson. In addition to his parents he was preceded in death by an infant sister Judy Darlene and brother Terry. Bruce was an Elder at the First Presbyterian Church of Logan. Was a coach for several years in Logan Little League and the Troop 58 Boy Scout Leader. He is survived by his wife of 55 years Joy Lawson. His son Bruce (Melanie) Lawson, grandson Caleb Bruce Lawson and his grand dog Maya. Bruce is also survived by sisters Lenora (Bo) Collins, Toni Adams and Bernitta (Billy) Bryant. Services will be held 1:00 p.m. Tuesday, November 7, 2017 at the Akers-James Funeral Home. Burial will follow at Forest Lawn Cemetery. Friends may call from 11:00 to 1:00 also on Tuesday. In lieu of flowers the family asks for donations be made to Dignity Hospice of Chapmanville. Online condolences may be left at www.jamesfh.com. Akers-James Funeral Home is in charge of arrangements.
To order memorial trees or send flowers to the family in memory of Bruce R. Lawson, please visit our flower store.